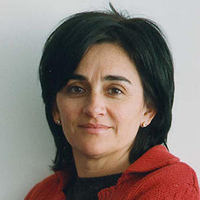 Yolanda Romero, born in Granada in 1962, graduated in Art History at the University of Granada. Between 1989 and 1999 directed the exhibition hall of the Palace of the Condes de Gabia and Contemporary Art Collection of the Provincial de Granada . Since 2000 to 2010 was director of the Centro José Guerrero where she organized and directed numerous exhibition projects, seminars, publications, and various educational and artistic research, most notably the Catalogue Raisonné of José Guerrero. Since 2001, she is part of the management team of the project Art and Thought of the International University of Andalusia, a long-term project that relates the field of art to culture and society. In 2005 she was elected president of the Association of Directors of Contemporary Art in Spain (ADACE), a position she held until 2010. She has participated in numerous jury and awards and taught at several Spanish universities.